In 1908 when Willard [McKinstry] was sixteen, he bought a market wagon and began his own business. Loaded with fresh vegetables ready for market, Willard's produce was welcomed daily by residents of the area, many of whom lived in tenement houses that had no space for gardens. Willard would make his customers feel at ease, and his customers looked forward to his reliable delivery of fresh produce; his reputation as a fine market gardener and a fair businessman was developing.

Today, Willard McKinstry’s tradition lives on. Presently operated by his grandson, also named Willard, and his wife, Nicole, the farm currently operates on many acres of land throughout the Pioneer Valley. We grow practically all types of fruits and vegetables and specifically specialize in early corn and tomatoes during our New England growing season. We currently grow forty to fifty different varieties of corn, which include all yellow, all white, and mostly yellow and white.

Since we are I.P.M.-certifield, all of our crops are quality monitored on a weekly basis. We spray our crops only when called for; in fact, some never get sprayed. Consequently, you can be assured that anything that comes from our gardens is of the highest quality and nutritional value.

A Short Family History of McKinstry Farms Through the Generations

The McKinstry property on County Road (McKinstry Avenue) saw service as farmland for six generations. From its acquisition by John II [1723-1813] to the death of his great-great-grandson Winthrop in 1977, the land served to support many family members for a period of over two hundred years.

John II (1723-1813) as the first settled minister in the area probably had little time for farming, but the land was used for gardens and for crops.

John's son Perseus (1772-1829) was mainly a tanner and cobbler, however from his farm account book we find many references to the keeping of sheep and of steers and the growing of small grains and potatoes. Family letters also refer to the delicious chicken pies served at the home of Perseus.

From the writings of Perseus's son Alfred Lyman (1823-1881) we have an excellent account of how the farm operated in the 1860's: It was a diversified farm, as most were in the mid-1800's, with poultry providing a large share of the income.

Alfred Williams' son Winthrop (1898-1977), who took over the farm about 1926, moved from crops to poultry and specialized in the chick hatchery business for thirty-eight years.

Finally, following the retirement of Winthrop in 1964, Alfred Willard, nephew of Winthrop, farmed the land for crop production until 1977.

In addition to the five generations of McKinstrys who owned the land on which they kept poultry, the sons of Winthrop and of his brother, Willard, also became poultry keepers for varying lengths of time. Winthrop's son, John Winthrop, and nephew Warren Chapin McKinstry worked in association with Winthrop, thus extending the line to six generations. Not to be outdone by the male side of the family, Winthrop's daughter, Alice, married a man, whose career was as a researcher and educator in the field of poultry husbandry. Winthrop would say that there was a minister or a poultry farmer in each generation of his family.

The McKinstrys of Chicopee: Eliza's Legacy, by Alice McKinstry Hawes

WE ARE OPEN ALL YEAR LONG!!!

We are true to our motto: "Picked Fresh Daily"

Our mailing list will notify you by email about our upcoming specials, and when our ripening produce is, and will be, available for sale. 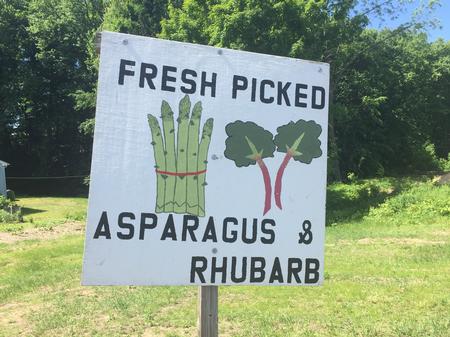